The History of Shasta Lake 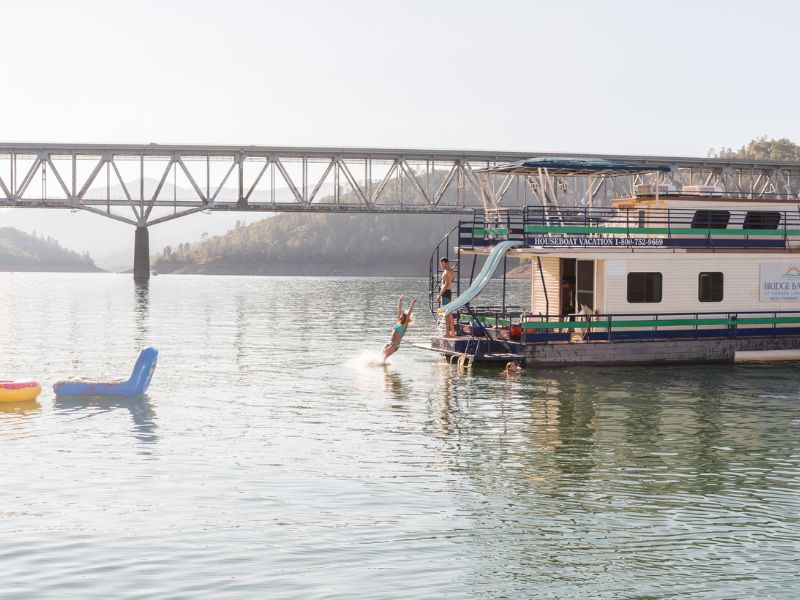 Ever wondered how the glorious Shasta Lake came to be? Before it was a popular vacation destination, it had an interesting origin story that is part of California’s history.

The Origin of Shasta Lake

Shasta Lake is a man-made reservoir in Northern California. With the construction of Shasta Dam across the Sacramento River during the 1930s and 1940s, Shasta Lake was created.

During the 1800s, the area around Shasta Lake was a popular spot for farming. The fertile Sacramento River was a draw card for those moving to the Eastern parts of the United States.

The Central Valley, however, was prone to floods and droughts. Early pioneers to the valley came up with a solution. The United States Geological Survey had plans to dam the water from the Sacramento River and other tributaries. Although the federal plan in 1919 was turned down by the federal government, the state plan got approval. The taxpayers of California would be responsible for the cost of the dam.

The state experienced problems with the funding of the dam with the Great Depression of the 1930s. By the mid-1930s, the federal government took over the project. They then constructed Shasta Dam.

Shasta Dam was first called Kennett Dam. It was named after the town that was flooded by Shasta Lake. Work on the dam begun in 1937. Many laborers who worked on Hoover Dam were recruited to work on Shasta Dam.

How World War II Slowed Down the Construction of Shasta Dam:

The United States entered WWII at the end of 1941. Many laborers working on the dam enlisted for the war. This slowed down work on the dam.

Women stepped in to complete the construction of the dam, which was finished in 1945. Here we refer to Rosie the Riveter. Women stepped into many previously male dominated roles during the war!

Upon completion, Shasta Dam was the second highest dam in the world after Hoover Dam. It provides electrical power, flood control, and water storage to the surrounding area.

Why Was Shasta Dam Built and What Purpose Does It Serve?

Capturing the vast amounts of water from the Sacramento River started in 1937.  This provided essential flood control. To this day, it also provides important hydroelectricity.

How Shasta Lake is Making a Difference:

Our History Paved the Way for a Bright Future

Interested in taking a deeper dive into the history of Shasta Lake? The United States Bureau of Reclamation, the federal agency that built the dam, offers guided tours throughout the year. The tours take two to three hours and include an elevator trip to the base of the dam as well as a view of the dam’s inner workings. These tours are available 5 days per week in summer.

Book your Shasta Lake houseboat today for a summer filled with fun! Today, Shasta Lake and the surrounding Shasta-Trinity National Forest are one of California’s most sought-after recreational destinations.

The area has thousands of acres to explore and enjoy. In addition, there are hundreds of miles of excellent trails, rivers, and streams waiting discovery.

A history of Shasta Lake and Shasta Dam (nationalparkreservations.com)

From Hunters to Houseboats: A Short History of Shasta Lake (lakeshasta.com)